Some observations from a cover crop trial in South Carolina that turned into a grazing trial.

Some observations from a cover crop trial in South Carolina that turned into a grazing trial. 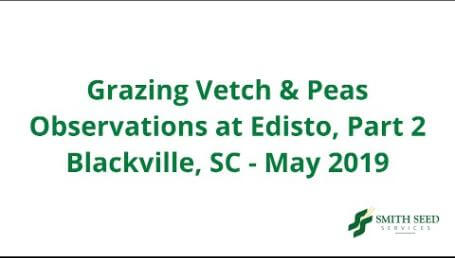 We look in-depth at the plants we gathered in Part 1.

Join us for a late spring field visit at Clemson’s Edisto Research Campus in Blackville, South Carolina where we look at the tail end of a “modified” cover crop study followed by a root review of plants we dug up.

As can happen, original plans are often modified along the way because reality simply doesn’t match paper. In the fall of 2018, we had intended on planting an extensive cover crop trial with the folks at Clemson University. The first change came when the fall rains refused to stop. This resulted in a decision to abandon the originally intended site for one that had the hope of draining. With limited options, a portion of a newly planted annual ryegrass pasture was lightly disked and plots were laid out. Finally, in late November about half of the trial was planted.

Our next curveball came when we found out that the trial would not be fenced off from the steers that would be cycling through grazing the rest of the pasture. In the video, you will see that much of the annual ryegrass also grew back in the plot area. So, at this point, our cover crop trial turned into a late-planting legume overseeding trial.

There are four key observations to note when watching: First, note the fundamental ability of peas and vetch to be grazed. Second, observe the roots we dug up and consider the value these root structures offer to the health of your soil. Third, note the differences between specific varieties. We have our AU Merit, Patagonia Inta, and WinterKing hairy vetches in this trial, along with WyoWinter winter pea. Lastly, we have both NitroCoated® and raw entries. Note the health of the inoculated plants and don’t shortchange your legumes in either cover crop or forage applications by not applying proper inoculant

Check out our cover crops featured in this trial!